Shortly thereafter, inspiration hit. “As always in my work, a painting just pops up in my mind in a spark. I told Victor ‘I have an idea.'”

Common to much of Pascal’s work is his signature character “the diver” depicted in surrealistic situations set against a stunning ultramarine background. Pascal often draws upon classical mythology as a kind of muse. Referring to the metaphorical Galatea, a statue that has come to life, he says, “I pictured Victor carving his famous and impressive Tiger Shark so perfect that, still having the tail fin carved on the marble stone, the front body of the shark became alive, chasing yellowtail snapper and bluerunners.”

The challenge for Victor came not with the shark, but with “the little man” – as he would often call it. “I don’t usually sculpt the human form, let alone my own,” says Victor. “It was very important for me to get this one ‘right’ – for several reasons, most of all to respectfully represent Pascal’s work.”

Alluding to his use of pastiches, parodies or quotations within his work as well as paying homage to or making references and reverences to the old Masters, Pascal says, “When Victor announced he wanted to make the painting a sculpture, I loved the concept at once. It worked the same way I’ve used so many times. Because of the “miss en abyme” (or “play within the play”) form, the illusion of the 2D painting becoming ‘alive’ in 3D, and because it was such an honor to have it done by the smartest and best sculptor.”

Carving The Tiger marks Victor Douieb’s 30th sculpture to be added to his catalog of work. Its gallery can be viewed here.
(extracts from Victor Douieb website: Art imitates Art Imitating Art With Pascal Lecocq Sculpture)

The inspiring piece “Carving the Tiger” by Pascal is available as a print on paper.

A special edition “Victor Doueib “, signed by both astists is  as well. (shown on the right)

Coincidentally, Victor and PascaI will be exhibiting together at the major exhibition SHARK ! at the Museum of Art Fort Lauderdale from May 12 to January 6, 2013. 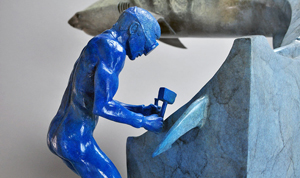 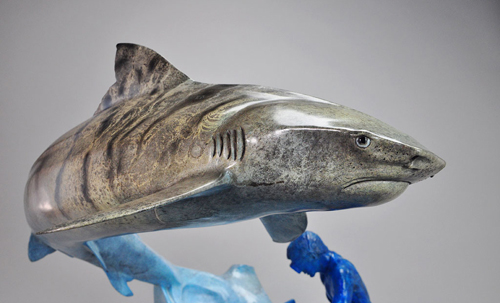